THE FIRST POINTS WERE WITHIN REACH, SAID VOSTATEK

On 27 to 28 April 2019, the FIM CEV Repsol Junior World Championship took place for the second time on the Ricardo Tormo Circuit in Valencia. In two Moto3 races, Czech motorcycle rider Ondřej Vostatek continued to gain further experience. After starting from 31st place, he gradually worked his way up to 15th place. However, he was deprived of his first points of the season by penalization for "track limit". He thus completed both races of the world's top juniors in 17th place.

In keeping with tradition, the entrants in the world championship met on Thursday and Friday for open training, which took place in pleasant sunny weather. The race qualification took place on Saturday. Although Ondra made good time against the huge competition in the qualification with only 0.5 seconds from the first 15 and 1 second from the top six, he took 31st place. In the second qualification, he improved his position to 19th place. Thanks to the fact that the temperature on the track was far higher, nobody significantly beat his own time from the first qualification and the ranking remained the same.

Ondra started well in the first race and got a few places ahead. The entire starting field formed a "long snake" and the positions of all riders changed continuously. The riders battled for every place and this resulted in the field breaking up into smaller groups of riders. Ondra gradually worked his way to 15th place and it seemed that he would get his first points. But two laps before the end of the race he was penalized for the "track limit" and had to take a run via the longer curve. He finally finished in 17th place. In the second race, Ondra again successfully got a few places ahead. But in the second curve of the first lap, Ondra made contact with the rider in front of him. And in order to prevent himself from falling, he had to swerve out of the curve and the entire field overtook him. So he had to start overtaking the competitors again from 35th place until he worked his way to 17th place, in which he also finished the race.

After the race, Ondřej Vostatek said:

"This weekend was very interesting. This time, the qualification was completely different from what I have experienced to date. This was really a big tactical move, which is characteristic of the MotoGP series. It is no longer only a matter of taking to the track; I make an effort all the time to make the fastest lap. It is mainly a game of nerves and I unfortunately only managed to get 31st place. In the second race I improved and got 19th place and it was also better in the warm up. The race was really difficult due to the fact that I started far in the rear. But I gradually fought my way forward and I believe that I will be even stronger in further races. I was very satisfied with my best lap time in the first race and it is a good signal that I certainly deserve to be in the championship. Points were within reach and this is further motivation for me. This weekend I had the opportunity to meet the fans for the first time at the pitline walk and I was very pleased. For this reason, I would like to thank my fans, partners and sponsors for their support and my team for the perfect work. Thanks to all!"

"We have acquired further new experience and we remained realistic and said that we would be glad to be in the first twenty. In his first race, Ondra really battled for points, which is superb. Although we do not have the latest technology, I think that Ondra raced very well and the team prepared the motorcycle very well. It was Ondra's first dry race in the Junior World Championship and he made a lot of progress during the weekend. He put on a stable and self-confident performance and I am satisfied with his best lap time in the race also taking into consideration the fact that he accomplished it at the age of 14. I think that this is more than good. We currently still face a lot hard work and this applies to both Ondra and the team; we all take great joy at each leap ahead. I hope that we shall continue in this direction in coming races too." 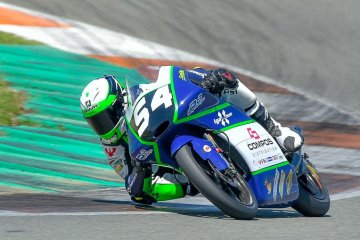