The Albacete circuit saw the start of a new season of the CEV Spanish championship on 7 and 8 April 2018. Thirteen-year-old Ondřej Vostatek shined in the Pre-moto3 category, aiming for his first victory in Spain at the beginning of the series.

Trainings in Albacete started on Thursday and Ondřej's times were among the fastest. Nevertheless, the whole team kept on working and trying different setting of the motorcycle. Unfortunately, some problems with the motorcycle electronics occurred during the Friday training, which required almost all of the training time to solve.

On Saturday, the team managed to prepare the motorcycle for the first qualification and Ondřej recorded the fourth-best time. The weather got a bit warmer before the second qualification, and the setting was changed once again. Ondřej managed to improve his time, but so did some of his opponents. The aggregate of both qualifications resulted in a seventh place on the the starting grid. However, it begun to rain heavily just before the start of the first race which was ultimately cancelled and moved to Sunday.

Sunday begun with a morning warm up on the wet track. The team strategy imposed Ondřej to just try out the motorcycle and ride carefully because warmer and dry weather was expected for the actual race. The first race was started at 12 o'clock. Ondřej moved forward to fourth place right after the start and formed part of a leading group with another five riders, fighting for each place from the very beginning. Ondra slowly moved forward and took the lead in the sixth lap. He fought hard for the first place with second placed Marcos Ruda. Their positions swapped several times but Ondřej was able to stabilise after several laps and started to increase his lead on Ruda. However, in the last lap, another Spanish rider, Alex Escrig, was able to outride Ondřej in the penultimate turn and got before our rider. Ondra finished the race a close second by 0.091 seconds. The second race started at 16 o'clock. Once again, Ondřej was able to reach the leading group of seven riders; this time, however, the group split after several laps and riders continued in pairs or alone. This time, Ondřej did not fight for the top three, but was able to finish the race in an excellent fifth place, holding second place in the running standings of the championship.

After the races, Jan Vostatek said:

"On Friday, there were some problems with the motorcycle, so we were worried about the beginning of the series. In the end, in worked out well and we are very happy about taking second place! A really big thank you and hats off to the whole team for their work. The second race showed that our setting was not ideal and even if Ondra tried his best, it was only enough for fifth place. Even so, these are nice points and it is important to collect as many as possible. Ondra was great and I am really proud of him. In Spain, it was his first time to lead the race, which is a brand new experience for him and I believe it will move him forward again."

"I am very happy that I managed to place in the top three in the first race. I was very nervous, hoping I don't make any mistake. I knew the Spanish won't go very easy on me. I was able to tire off Marcos in the end, but Alex got me. When I prepared to go off the penultimate turn, he pulled in. I could close it off for him but that would mean we both go to ground. It is my second top three in Spain and I didn't want to lose that. I believe that my chance is yet to come. I couldn't do much better in the second race. It looked like my motorcycle was losing power but I don't know... it just worked better for my opponents, but thanks to them we still have things to improve. I have to say a big thank you to my team, our sponsors Compos Distribution, Network Support, Psi Hubík, Autoklub ČR, Shark, Tyrex, and also my parents for their great support. I really appreciate that and thank you!" Ondřej Vostatek concluded. 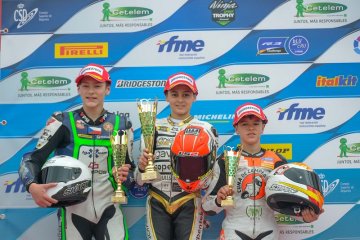