ONDŘEJ VOSTATEK HAS A CLEAR VISION FOR THE 2018 SEASON

After the excellent completion of the 2017 season on the Spanish CEV Championship in the Pre-moto3 category and in the Junior World Championship, where he competed in the European talent cup category, Czech rider Ondřej Vostatek has clear a vision for the upcoming 2018 season.

After having considered several offers for cooperation from Spanish teams and in regard to the excellent results achieved during a very short time period, Ondřej Vostatek will continue in cooperation with the new and young team of IGAXTEAM, the leader of which is Alex Martinez, still an active motorcycle racer himself. In conjunction with the IGAX team, Ondřej will again participate in the best and highest quality championships in the upcoming season that he can, as a thirteen year old racer, take part in. As like in the 2017 season, he will again compete in the Spanish CEV Championship in the Pre-moto3 category and on the Junior World Championship in the European talent cup category.

"It is a big challenge for us again and the last success is a big motivation, both for us and for the whole team. We were newcomers in these categories this year, and for more than a half of the year we struggled with the technique. Next year we would like to achieve a little bit more, actually a lot more, as much as possible. We want to make both riding and technical progress in order to be in the best form in two years at the Junior World Championship. It will require a lot of effort and work again. We are currently planning and preparing ourselves and believe that we will again receive support from our stable partners, as well as hoping to attract the interest of others. Anyone who is interested to join us is very welcome. I think that the success and results in the 2018 season will be the most important and key milestones for Ondra in his sporting career thus far. They will show us the path to take in the future. This is why we will do everything with the highest focus and determination and, as I already mentioned, any kind of support is welcome." Jan Vostatek, father and manager of Ondřej, added. 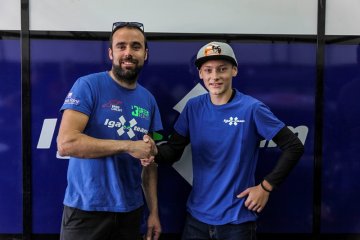