ONDŘEJ VOSTATEK BATTLED FOR SUCCESS IN THE SPANISH CHAMPIONSHIP (CEV)

The final races of the CEV took place in Jerez on 20-21 October 2018. In the Pre-moto3 category, talented Czech rider Ondřej Vostatek did very well and, together with his Igax Team, he coped with the difficult conditions and waged a fierce battle for victory at the end of the season.

The forecast for the training sessions and the last race of the Spanish Championship was not very optimistic, but on the other hand, it put the capability of the entire team to quickly respond to actual changes in the weather to the test and offered an opportunity to test and prepare for all possible race variants. The practise sessions started on Thursday on a wet track. Ondřej gradually picked up speed and improved his lap times. At the end of the day, training continued on a half-dry track, and Ondřej's time ranked among the fastest. On Friday, the track was dry, so the team had an opportunity to test the "dry" configuration of the motorcycle. But Saturday's qualification was on a wet track and everything was re-set to the "wet" configuration. Ondřej coped with the first qualification and took a good seventh position. The second qualification was accompanied by even heavier rainfall, so the race took place in very heavy rain conditions. The riders could no longer improve their lap times, but Ondřej had the fifth fastest time. After combining times, the positions remained the same as in the first qualification, and this meant that our rider started from seventh position on the starting grid.

The warm-up prior to the race on Sunday took place on a half-dry track with occasional pools of water. Ondřej set out to test the maximum limits of the motorcycle in these conditions, which he did successfully. In his two fastest laps he attacked the best warm-up lap time, but was twice high-sided consecutively at the same place. Ondřej easily coped with both and finished the warm-up with ease, making an effort to save the motorcycle for the race. Just before the start of the race, the conditions were still not clear and the team did not configure the motorcycle until the last moment. Eight minutes before the start, the team opted for the dry motorcycle configuration.

Ondřej started in seventh position and was already in the leading group of riders by the time they reached the first bend. The battle for every position then started in the group of the six leading riders. The positions of the riders continuously changed and they often entered bends abreast in groups of three. During the race, Ondřej found himself in the leaders position several times, as well as in second and third position. The chances of all the riders were very equal. In the penultimate lap Ondřej was in control of third position. Toward the end of the race, he launched a successful attack on the leading position. He entered the last bend in first position under attack by local rider Daniel Muňoz, who pushed our racer beyond the kerb. This slowed Ondřej down enough to see him finish 0.3 tenths of a second behind the winner in fifth place. Ondřej also placed fifth overall in the Spanish Championship and the Pre-moto3 category, as well as in the overall ranking of CEV 2018, where he historically became the most successful Czech racer in this category ever.

After the races, Jan Vostatek said:

"I think that it was a perfect race at the end, although a few hundred metres and a bit of luck separated us from the podium. Ondřej put on an excellent performance and fought hard from the very beginning, so he deserves respect and acknowledgement. In the end, the weather also allowed us to prepare and test different variants. I must also thank all of the team members not only for their excellent work this time, but also throughout the season where, like all of us, they gave their maximum effort. All the MIR motorcycles ended up in front of Ondřej. These motorcycles have an engine and concept different from Beon and Ondřej was actually the best on the Beon motorcycle."

"Otherwise Ondřej was in the Spanish top five during the entire season, so we would like to go a bit higher and enter the Junior World Championship, in the Moto3 category. One race in the Talent Cup still awaits us, and subsequently a lot more work, which shall be very difficult in order for us to be able to cope with everything and secure everything necessary for the Junior World Championship. Although we are doing everything possible as a family to achieve this, it shall also depend on our partners. In this manner, I would like to extend my thanks to all for the confidence and for the fact that they are accompanying us on our difficult journey. We firmly believe that they shall continue supporting us and share in the dream of a skilful boy who has already for several years demonstrated his skills, and upheld the good name of his country in this challenging sport. So I extend my thanks to all those who are helping us, particularly Compos Distribution, Network Support, Psi Hubík, Shark, and Tyrex, and we hope that Autoklub ČR will not remain on the sidelines and will support us in the Junior World Championship, as it has supported all our predecessors in the past." added Jan Vostatek in conclusion. 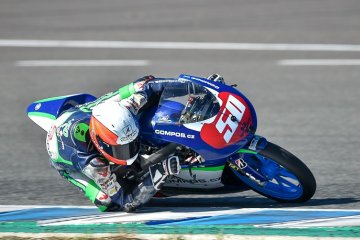