Over the weekend of 24– 25 November 2018, the season ended for the talented Czech motorcycle racer Ondřej Vostatek on the Valencia track. With his Igax team he has had a successful season on the Honda NSF 250 standard motorcycle both in the Spanish CEV Championship in the Pre-Moto3 category and in the European Talent Cup. In both championships he was able to compete with world leaders and now he is ready to move to the higher Moto3 category in the Junior World Championship. Although Ondřej received several offers from World Championship teams, he signed a contract for the 2019 season with his existing Igax team.

'Yes, we received some really good offers from teams that regularly participate in the Junior and Senior World Championships, but we decided to stay in the Igax team. The boys, along with Ondřej, were able to continuously test their limits and improve their performance. We were able to compete and lead the race all the season. Although we ended up getting only one medal, we were very close each time.'

'We highly value the huge dedication, fighting spirit, and will to win in all members of the team, which is essential for us. Igax is the right partner for us and is entering the Moto3 world for the first time, just like us. Ondřej is now 14 years old and we need to gain experience for at least two years. If we find out that we have significant gaps in technique or within the team, we will consider accepting one of the offers from the world teams.'

'Our main goal still is the Senior World Championship, and we have to make every effort to achieve it. Firstly, we need the necessary funding for quality preparation. We would like to invite new partners willing to support us and help this talented boy make his dreams come true,' Jan Vostatek added.

'We are happy to rise to the challenge,' said Team Manager Álex Martínez. 'Moreover, we have a racer who is greatly respected here in Spain and is ranked among the world's top riders. We have known Ondřej for two years now, so it's going to be quite easy. It's going to be a year of trial and error, but we will do our best! The whole team is really excited and motivated. This is a very important step for all of us, and I do believe that we can do it.'

'We got from the Spanish CEV 85GP and Pre-Moto3 to the FIM CEV Repsol Moto3. This is a unique opportunity for us, so the former manager and racer Bernat Martínez, and Jorge Lis, who will be the head of the sponsorship division, will join the team.'

'I'm looking forward to the new season! After the Honda NSF 250 standard and Beon Pre-Moto3, I am going to switch to the Moto3 KTM RC 250 motorcycle, which we were able to get from Valentino Rossi's VR 46 Riders Academy. Now we are heading to the first tests in Spain, where I will be able to try this motorcycle for the first time. I think it's going to be great and I do hope I will do well in the first tests,' added Ondřej Vostatek. 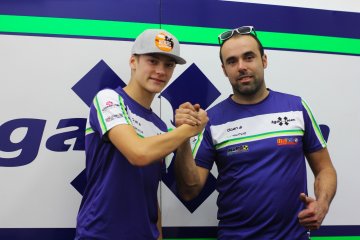